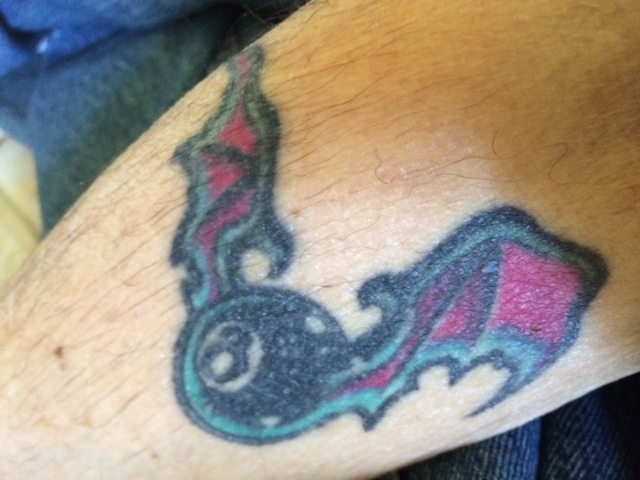 Like my tattoo? I try and show it off whenever I get the chance. I had been wanting a tatt for a long time, but I wanted to get one that, you know, meant something. Wifey and I spent years playing pool in a league. Eight-ball Slop was our game – no shots called. As long as you hit a valid object ball (stripe or solid), if you knocked your ball in, it counted. There was never a question about intention – no such thing as an “accidental” 5-ball combination. Your ball goes in, it counts. As you may well imagine, this style of Eight-ball was popular only with other league players. Try it with your average patron, you could end up with serious injury.

Now, I'm no hustler. I wanted everyone to know I could play, that my cue spelled doom to all comers. So when I saw the tatt, I had to have it. I figured it would give me a psychological advantage. But I was concerned – I was infected with hep C, and I didn't want to risk infecting anyone else. So, I talked to Troy, one of the artists in the tattoo parlor. I told him straight up about my infection. He laughed, then said, “We treat all our clients like they've got the plague.” It got me thinking, you know, “What if they do have the plague?” So, I started asking about their sterilization methods. He showed me around his little station, cramped, but organized and spotless. Troy had his own autoclave, and boxes of brand new needles. He told me every client got fresh, guaranteed-sterile needles, thrown away after each tattoo session. I finally asked him, “This is going to hurt, isn't it?” Well, Troy laughed again. He said, “Listen, pal. If tattoos didn't hurt, nobody would get them.” It kinda made sense. Kinda.

Now, I couldn't be happier with the job he did. My ink is over ten years old, and it still looks recent; but really, I'm trying to make some kind of point here. Yeah, I know – so get to it, right? Hepatitis C and tattoos.

Approximately 25% of folks with hep C have tattoos. However, there is no significant correlation between getting a tattoo at a commercial tattoo parlor and new infections with HCV. In other words, tattoos among those who have hep C appears to be a lifestyle choice – not a source of infection. There is, however, a much greater chance of contracting hepatitis B. So, if you're thinking of getting a new tattoo, first of all, make sure you're vaccinated against HBV. Then, choose only a reputable tattoo studio with a lot of repeat business. When you make your appointment for tattooing, ask to meet your artist. Check out his or her workspace. Is it clean and well-organized? Although neatness can never assure safety against infection, it does show a level of pride in one's trade, and goes a long way toward creating an environment of trust. Ask about sterilization techniques and fresh needles, and never, ever get a “street tattoo” from a friend or acquaintance. This is the most dangerous way to get your ink.

So, now that you know the rules, enjoy your tattoo experience.

The First and Last Symptom to Leave with Hepatitis C

I Have Type C and not Type A or B

Has hep C had an impact on your relationships?